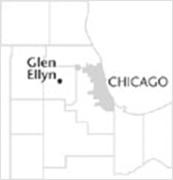 Deacon Winslow Churchill and family arrived from New York in 1834 to become the first landowners in the area that is now Glen Ellyn. New neighbors soon established a tavern and schoolhouse at the intersection of Indian trails known as Stacy’s Corners. The nucleus of settlement shifted to the south when the railroad came through the village in 1849. Although no stop was planned for the area, Lewey Q. Newton deeded a right-of-way to the railroad and offered to build a depot and water tank at his own expense if it would permit a stop there. This became known as Newton Station. Within three years, the new postmaster named the town Danby after his birthplace in Vermont.

Religious services were conducted by circuit riders until the first Congregational church was established in 1862. Various Protestant churches rose in the village and it would be more than 60 years before Roman Catholics built St. Petronille and the Maryknoll Seminary.

In 1889 Thomas E. Hill and Philo Stacy arranged to dam the stream near town to form Lake Glen Ellyn, named for the glen in which it rests and a Welsh spelling of Hill’s wife’s name, Ellen. The following year, nearby mineral springs were discovered, and Chicago’s infamous Madam Rieck purportedly moved her brothel to Glen Ellyn. 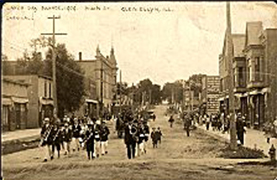 In 1891 Glen Ellyn, advertised as Chicago’s newest suburb and health resort, became the town’s official name. The large Lake Glen Ellyn Hotel opened in 1892, the same year much of the business district was destroyed by fire. Fourteen years later, the hotel was struck by lightning and burned to the ground.

In 1907 Glen Ellyn’s first fire department was organized. By the end of the twentieth century, it would be known as the last all-volunteer fire organization in DuPage County. By World War I, Glen Oak Country Club served the Oak Park and Glen Ellyn communities, and in 1922 the first Glenbard high school was built.

In the late 1990s Glen Ellyn was home to an Illinois state center for the deaf and blind. The village operated Village Links, a golf course owned by the municipality and built in conjunction with a water retention project. Its park district sponsored the world-famous Glen Ellyn Children’s Chorus, established in 1964. The College of DuPage, founded in 1967, had become a major area educational institution. 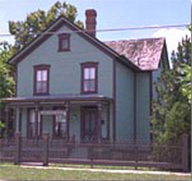 In the mid-1830’s, early settlers were attracted to Babcock’s Grove, (as Lombard was called at the time) by rich farmland; more settlers came when the railroad route westward from Chicago followed the St. Charles Road Trail. In 1927, Colonel William R. Plum bequeathed his home and adjacent lilac gardens to the town as a park and library site. As a result of Colonel Plum’s bequest, the Lombard Park District was established by court order in 1927. A tour of the historic downtown area, within walking distance of the commuter train depot, highlights the significant heritage earlier residents left to contemporary Lombard: the historic Lilacia Park, Lombard Historical Museum, Helen M. Plum Memorial Library as well as the Maple Street Chapel, a historic landmark in the spired Gothic style built as the original First Church of Lombard in 1870.Lilac Time Lilacia ParkEach year during Lilac Time, which occurs during May, Lilacia Park exemplifies the historic beauty of Lombard in bloom. The 8.5 acre park is fragrant with flowering lilac bushes, 75,000 tulips and other spring-flowering plantings. Lilacia Park is the focal point for residents and visitors alike during Lilac Time as well as throughout the changing seasons. The lilac tradition is never complete until the last unit of the annual favorite Lilac Parade has made its way down Main Street. Estimates boast that 55,000+ spectators line the parade route to view and cheer on the various bands, floats and business and civic participants of the ever-growing parade. For additional information on the history of Lombard, the book Footsteps On The Tallgrass Prairie by Lilian Budd, is available at the Helen Plum Memorial Library or at the Lombard Historical Society. 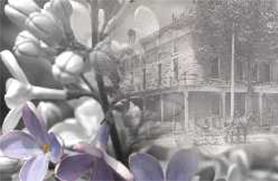 During the summer, the traditional Taste of Lombard brings thousands out to view, taste and see the sights and sounds the Lombard Jaycees offer. A fourth of July fireworks extravaganza is always a part of the celebration that brings together local vendors, themed entertainment and characters, children’s games and other festival activities to round out a larger scale neighborhood event topped off by the traditional fireworks display.

Winter events traditionally include the lighting of a holiday tree in downtown Lombard. The Lombard Park District holds a holiday light festival at Lilacia Park and the Lombard Historical Museum offers a Victorian celebration while other local community groups celebrate the season with musical events and other special activities.